Grand Soleil 44 is the new challenge of Cantiere del Pardo facing the performance world. To rise to this challenge, Cantiere del Pardo has turned to the designer who, in recent years, more than anyone has known how to interpret the concept of performing hull: Matteo Polli.
Many call him the “Wizard of ORC” thanks to the numerous titles won in recent years with the boats he has designed: three world championships and two Italian championships in the ORC category from 2015 to date, as well as finishing on the podium in many other important European regattas.

This new 44-footer completes the Grand Soleil Yachts Performance range dedicated to the more sporty owners in search of a boat that offers high performance able to give results also in regattas, inserting itself among the GS 34, GS 48 and GS 58.
As already seen on board the Grand Soleil 48, the GS 44 will also be available in a double version: one layout will be more indicated for cruising, with a different sail plan set-up and deck to simplify manoeuvres, the other will be more suited to racing to give the best in regattas.
Style and elegance complete the DNA of this new 44-footer which resumes the family feeling of the other models of the range.

Gigi Servidati, head of new model development at Cantiere del Pardo, explains the philosophy of this new hull: “Performance, style, elegance, navigability and safety. It has been a great stimulus to think up this new Grand Soleil 44 Performance, because we wanted to design a boat with all these characteristics. I asked Matteo Polli to realise a hull with good shape stability, which could win regattas but not too extreme in the lines to avoid penalising volumes”.

As always, the protagonists of this new project also include Nauta Design (Exterior and Interior Design) and the Technical Department of Cantiere del Pardo.

Vincenzo Candela, chief engineer of the Technical Department at Cantiere Del Pardo, comments the birth of the new GS44 as follows: “This new model has allowed us to achieve the great target of completing the new Grand Soleil Performance range. The GS 44 is the only boat on the market to offer the possibility of the double layout of the deck to satisfy both owners with racing ambitions and owners who prefer cruising and appreciate an aggressive but elegant design, a distinctive feature of every Grand Soleil. An extremely clean-cut layout, three cabins and two bathrooms both with
separate walk-in shower complete the boat. Particularly stimulating for the entire Technical Department was the new collaboration with Matteo Polli: we found ourselves immediately on the same wavelength in terms of the goal and achieved our target, the most beautiful and fastest cruiser on the market in its category is about to be born. And now we will apply our maximum concentration to make it win on the first regattas.”

Massimo Gino of Nauta Design speaks of this new hull as follows: “The collaboration between Nauta (Exterior and Interior Design), the Technical Department of Cantiere del Pardo and Matteo Polli (Naval Architecture) has led to the development of the 44 Performance, the most performance oriented model of the entire Grand Soleil range. The deck, with resumes the family feeling of the big sisters is, if possible, even more streamlined and sporty with the addition of several important new touches of styles on the geometries of the deckhouse, on the sheer line and on the transom. Despite
a light and sporty hull, the interior liveability is astounding for the volume that can be used and perceived. Following the trend of the latest Grand Soleil Performance models, the on-deck space available on the 44’ to race in a regatta and to enjoy the boat in cruise mode is truly remarkable, with cockpit dimensions that have been increased significantly, compared to previous models”.

The soul of the new Grand Soleil 44 is that of a performance cruiser which knows how to be competitive on the IRC and ORC regattas: a boat that is easy to use for both cruising and racing in regattas. The lines of the hull are modern and aesthetically delightful with no particular forcing. The distinctive features of the boat include the positioning of the mast further to the rear to allow a greater sail area for the bow sails to maximise performance considering the average Mediterranean conditions. This choice has also allowed to move the position of the cabins forward and have a larger
cockpit compared to preceding models.

Matteo Polli explains this decision as follows: “The position of the mast on the new GS44 is more rearward to benefit the dimensions of the fore triangle. The larger size of the jibs not only improves the performance in light air but also makes the boat more agile in coming out of turns. Furthermore, this feature allows the use of self-tacking sails for cruising that maintain very respectful area and proportions. A large fore triangle also allows to make the best use of rollable sails (foresail, jib, Code
0), ideal on cruises and in regattas, because they always allow to have the right sail at the right moment without the need for conventional demanding sail changes.

DECK: FROM PERFORMANCE TO RACE

The maximum beam of four metres is essential to maximise the stability of shape, but also to ensure large volumes both on deck and in the interiors. Simple technical solutions have been integrated with the aesthetics of the deck that can be equipped
with six winches (race set-up) or four winches within reach of the helmsman if cruising and easy sailing is preferred. The self-tacking jib is standard, to allow easy management of the boat, but transverse rails can be mounted on request to regulate the jib lead. The result is a deck level that guarantees excellent performance and speed in manoeuvres during a regatta and when cruising.

As already seen on board the Grand Soleil 48, the 44 also foresees the possibility of choosing between two different sail plans: standard, with aluminium mast intended more for the cruise sector and race, in carbon (larger) for the competitive sector.
As regards the appendages, there is the possibility to choose between three different drafts: the standard one of 2.60 metres while options are available with drafts at 2.40 metres and 2.00 metres.

To note is the interior layout, which includes three cabins and two bathrooms (both with separate walk-in shower). The liveability of the space is astounding, considering the sporty nature of the hull. The volumes perceived are truly remarkable. The space below deck enjoys a generous beam which provides large and comfortable volumes: the L-shaped kitchen is positioned to the left, the dinette is composed of a comfortable U-shaped sofa with a dining table at the centre which can seat up to
8 people and, on the right, of the walled in sofa for three with chart table positioned against the bow bulkhead. The master cabin, with a comfortable double bed, small sofa and dedicated bathroom is generous in size for a sporty 44-foot hull.
The considerable natural light that enters through the various hull windows and on deck makes the interior space even more comfortable.

THE NEW GRAND SOLEIL 44 IN THE REGATTA WORLD

This new model does not intend to conceal its racing soul. Matteo Polli has done an excellent job of optimisation to achieve a hull that would allow to maximise absolute performance and performance/rating ratio. The clear goal is to maintain balanced hull lines to simplify navigation even for the less experienced owners. The fundamental parameters of the hull were chosen based on an in-depth study: four different hulls were subjected to CFD and VPP analysis to achieve the best optimisation in the real performance of the boat and in the performance/rating ratio. 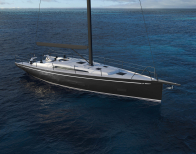 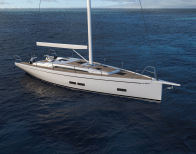 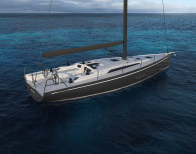 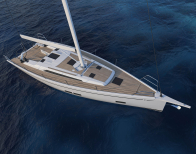 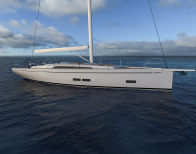 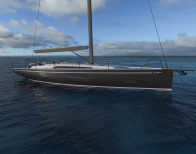 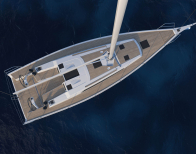 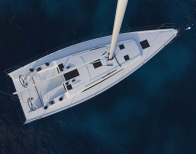 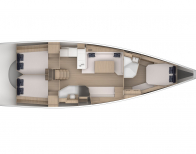 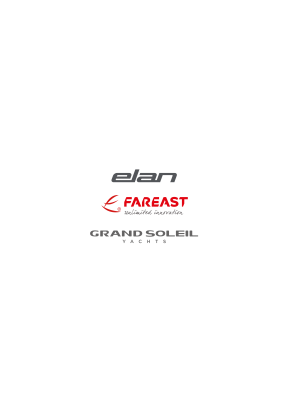 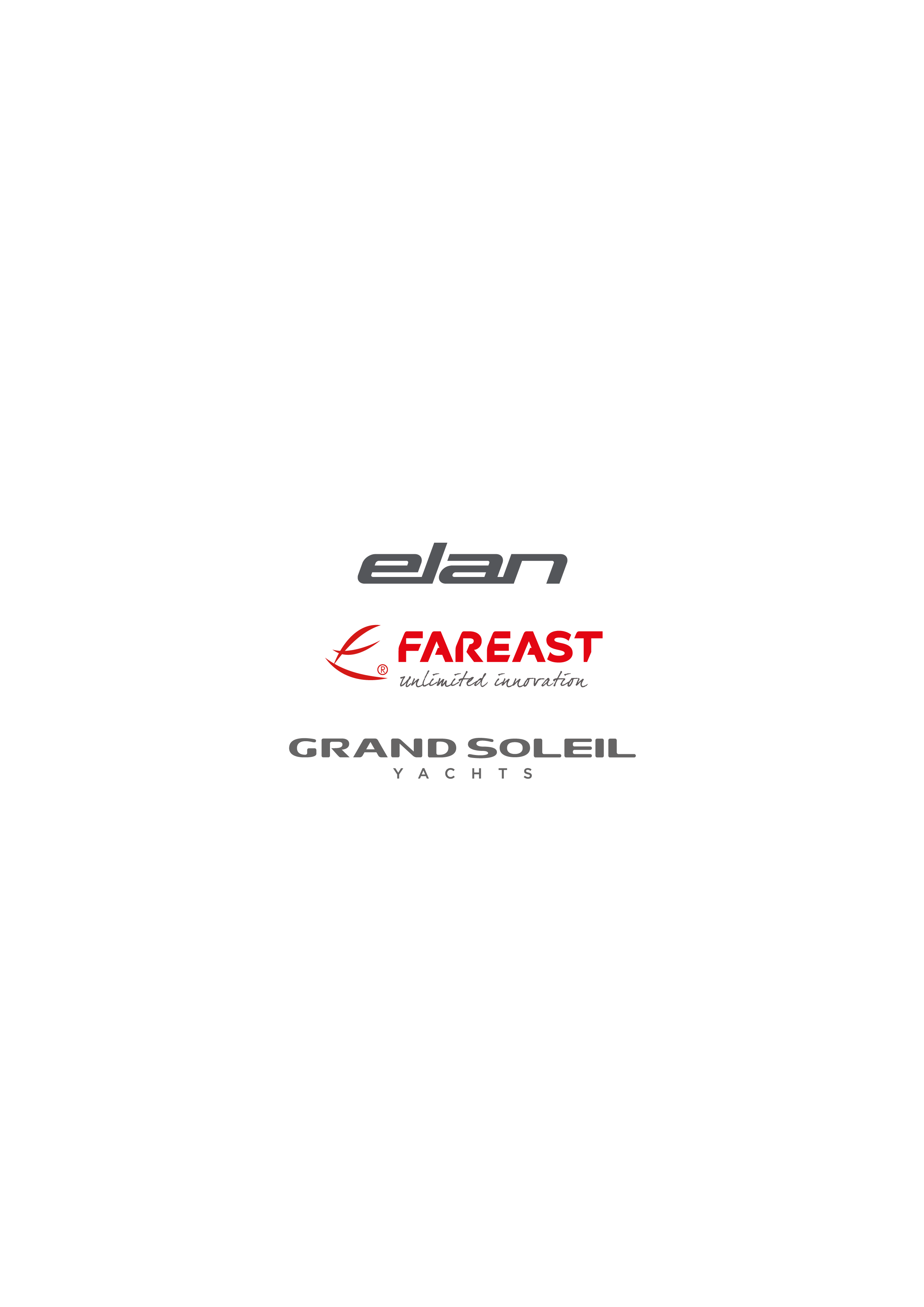